Kribi is home to Cameroon’s best beaches: the sand is fine, the water crystal clear, fresh fish is guaranteed by local fishermen. Now Kribi has become part of a larger infrastructure project.

Holidays in Kribi – the dream of many! Romantic beaches and a few minutes south of the city you can find the chutes du Lobé , an impressive set of waterfalls that empty directly into the sea – it’s a beautiful sight and local artisans invite you to buy their paintings and eat directly on the beach. Now Kribi has become part of a larger infrastructure project. Actually the biggest infrastructure project since independence and the government so far has laid hands on 26,000 hectare of land in this southern part of Cameroon. 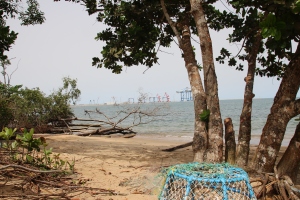 The Chinese Company China Harbour Engineering Company (CHEC) has accomplished Phase I of the port and is currently felling trees for a corridor harbouring a highway and a railway line; the next step, Phase II, will be built by the French company Balloré. Today investors are going and coming to prepare the ground for their position in the future industrial zone of Kribi. Though the port is fully functional, it is not officially launched as it is still disconnected from the mining areas and markets. Kribi is also the mouth of the Chad-Cameroon pipeline – for the time being the oil is fed offshore directly into the ships, but Cameroon hopes to refine the oil in the new industrial zone and profit from gas production going along with the oil. Even a totally new city for 100,000 inhabitants is planned. 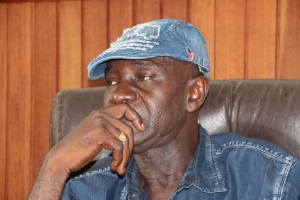 ‚This is organized theft’ says Francoise Prudence Nambvoumbo, Traditional Chief of Dombé in South Cameroon. She talks about very unfair land deals, which are shaking Kribi’s livelyhoods to the very foundations. Dombé, a sub-urban township of Kribi, is situated about 40 kilometers away from the new deep water port Lolobé and lies in the middle of the new infrastructure development area. It is a bit unexpected that the chief is female, but the elders are proud of her. She takes care of the community, decries land theft without hesitation. And land grabbing is the biggest problem here. 70% of the land is already lost, denounces Ernest Ekoubé, president of the local Human Rights organisation. “People have no refuge, children don’t go to school and they don’t have access to health facilities. Eight villages have been cleared; Kribi has about 20,000 new inhabitants. “

Both, the chief and the human rights activist, report the same incidents. When information was leaking that the region will host a big infrastructure project, politicians and business people rushed to the side to acquire land. That was in the late 2000s. They presented themselves as partners for local land holders, who own their land only according to customary law. They claim to help with registration, especially the fees. In return, they take 50% of the land as their own share. Only those who have registered their land will be eligible for compensation in case of compulsory acquisition of land. Those who have registered land in time can sell it to international companies who want to establish themselves in the future industrial zone.

Why do people accept these deals? Why do people take part in deals, which Chief Francoise calls “Organised Theft”?

Lands belong to the nation as long as no individual has registered them. A multitude of fees are due – even when the administration has committed errors in the papers, the applicant has to pay for changing it. There are about nine institutions that have to inspect, to issue documents and stamp them. No file is moving from desk to desk without tipping the officer. The bottleneck is the consultative board. The consultative board is the guarantee that civil society is included into land deals. But the prefect appoints the members, including traditional authorities. And, the board does not have any budget to pursue its tasks. So any person who wants to register land, has to agree on a price with the vice prefect for the board has to inspect and demarcate the land in situ. The board also is the institution to mediate land conflicts to avoid legal litigation. Any problem with boundaries, compensation, double registration, encroachment or illegal occupation: it is an administrative commission that solves the problem.

“It is inconceivable, what happens in this area”, says human rights activist Ernest Ekoubé. The so-called partners arrive, they visit the customary chiefs to investigate where they can get land, they hand over an envelope, take a whiskey and pursue the traditional customs. Next they go to the villages with something to eat and to drink. And there the cheating starts. They have already filled contracts; the family often does not read it. They take it to a notary, who finishes the registration. The family is happy: 2,000,000 franc is an amount they have never seen before! A miracle! And all of it only for a signature!” It is years later when they are evacuated and don’t know where to go, that they realize what has happened.

Fisherman Emmanuel travels within a group of 60 along the coast. His house was built by his grandfather but he has to move for the port of Kribi.

Fishermen Emmanuel has never had the means to register his lands. He lives with his family in view of the new harbour at the beach of Lolobé. His wife is planting cassava and vegetables – this will not continue when phase II starts. The evaluation commission has already visited his house, the house his grandfather has built. They measured 9 by 11 meters for his compensation and calculated 200,000 franc (about 300 Euros) for this home of seven people. “They have promised us jobs, but the Chinese company is ignoring our existence. They work 24/7 in 12 hour shifts. They need technicians, not people like us. How can my wife cook, how can I fish and work 12 hours in the port? They remain among themselves, there is no dialogue!” Till date, no compensation has been paid. They also came to undertake environmental impact assessment. Emmanuel is outraged: “So they care for the nature but don’t care for us?” No relocation plan has ever been considered.

Environmental Impact Assessment, says Ernest Ekoubé, is only done for the reputation of the international investors to calm down media and international NGOs.

It does not have any impact or consequence. And the promise of employment and jobs? The Human rights organisation tried to check on the working conditions at the port in vain. They were carried around to visit the facilities but people were afraid to speak. But anyway, only a handful of people got jobs, while thousands have to leave their lands. With a handful of activists, working in different NGOs in Kribi, the human rights activist wants to form a platform against land grabbing. They want to bring their demands to the attention of the government. “We need people who know what is going on and can accompany those, who want to register their land. Lawyers have to inform them about the content of the contract. But we are few who can support people who don’t know their rights”: