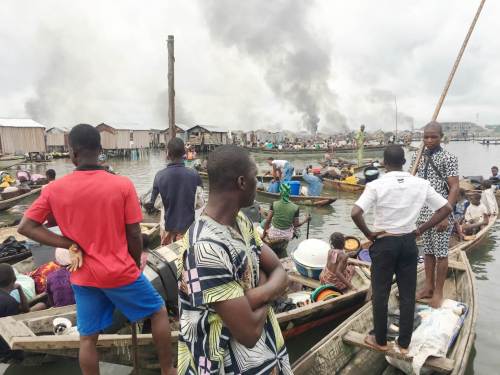 Residents evacuate Otodo Gbame, a slum community on the edge of Lagos’ Lagoon, on April 9, 2017. State authorities forced more than 2,000 residents from their homes at first light and onto boats in the lake, before setting fires to homes. Photo: Justice & Empowerment Initiatives

LONDON, April 10 (Thomson Reuters Foundation) – One man was shot dead and another wounded as Lagos state police evicted more than 2,000 residents from waterfront shacks and razed a slum community to the ground, eyewitnesses said on Monday.

Hundreds of residents fled in canoes on the Lagos lagoon after police at dawn on Sunday launched the fourth wave of forced removals from the Otodo Gbame community in six months.

Resident Tina Edukpo said once people had fled to the water, a team of around 20 officers spread out across the slum and poured kerosene onto the wood and metal shacks, firing tear gas and live rounds toward residents shouting from their boats.

One man, Daniel Aya, 20, was shot in the neck and died before his boat could reach hospital, according to another eyewitness, Andrew Maki.

“They started shooting tear gas and guns, people ran, carried their children without any clothes,” Edukpo told the Thomson Reuters Foundation by telephone.

“When they started entering structures they just looked inside, and lit the structure on fire.”

Morayo Adebayo, a researcher for Amnesty International Nigeria, said residents were fired on when they returned to homes to salvage belongings, with Monday Idowu, 17, shot during the violence and needing hospital treatment.

“I was trying to help my mother carry our things to the waterside when I was hit with a bullet in my side. I told my mother to run. Some other boys carried me into a boat and from there to the hospital,” Idowu told the Thomson Reuters Foundation by telephone on Monday.

Maki, co-director of Justice and Empowerment Initiatives (JEI), a Lagos-based human rights organization, said the eviction was carried out despite an ongoing legal challenge to the state’s plan to clear informal settlements from waterfront land.

Maki said the chief commander of the Lagos Task Force told him police were working on orders issued directly from the Lagos State Governor Akinwunmi Ambode.

The Lagos state governor’s office and police did not answer phone calls or respond to questions by email.

However a statement on the website of the state governor’s office, posted on Sunday, said a police officer was killed during a raid on a nearby settlement and pledged police action to clear “illegal waterfront shanties that harbour criminals”.

“We wish to solicit the understanding and support of the public on the need to rid our waterways of illegal shanties that are not only an eyesore to our collective decency but have become a fertile ground for breeding illicit and illegal activities,” the statement said.

The Lagos state government announced its intention to demolish all waterfront slums, home to around 300,000 people, in October last year for public safety.

The prime waterfront land is earmarked for re-development with plans for luxury apartments in the fast-growing Nigerian mega-city of 23 million.

This latest eviction came less than three months after the Lagos State High Courtruled that planned evictions would be “inhuman”, and the government must enter into mediation with dozens of eviction-threatened communities.

JEI has challenged the Lagos state government for disobeying a court order to ban evictions after 4,700 residents homes were razed in March.

Maki said he hoped the court would rule against the state authorities at a hearing on Wednesday after state representatives failed to appear in court or present a defence.

He said Nigerian law does not permit forceful evictions under any circumstance and there was no evidence to connect residents of the Otodo Gbame to the policeman’s killing.

This entry was posted in Resistance. Bookmark the permalink.